Webroot is an easy-to-use antivirus program worthy of your attention, but it fell short of the top-tier software we tested.
A
Gizmodo Advisor Reviews Team 12/30/2022 12:00 am

We like the fact that Webroot SecureAnywhere AntiVirus software is connected to Geek Squad, Best Buy’s in-house tech support team, a big plus for those who prefer in-person assistance when and if they need computer help. During our testing, however, Webroot allowed some suspicious sites and malware to slip through its defenses.

Overall, the antivirus software performed well enough on Windows devices, but it isn’t quite in the same league as its sister plans, Webroot Security Plus with AntiVirus and Webroot Internet Security Complete with AntiVirus, or our other best antivirus programs.

Webroot has been delivering antivirus solutions for computers for more than 24 years. Based in Broomfield, Colorado, Webroot is one of the more popular antivirus programs on the internet today. It offers three plans: Webroot SecureAnywhere AntiVirus, Webroot Security Plus with AntiVirus and Webroot Internet Security Complete with AntiVirus.

Our Webroot antivirus review covers all personal plans on Android, Windows and iOS devices. Webroot performed well overall in our tests, offers great customer service options and has some of the best antivirus features in the industry.

Who is Webroot Best For?

Webroot’s SecureAnywhere Antivirus software plan for one device scored well in our tests. This plan, however, doesn’t offer many additional tools or features. On the positive side, it’s a lightweight solution that doesn’t take up much system processing or power. This means that it can be used on computers with less power or older devices. We believe the SecureAnywhere plan is best suited for users with just one personal computer to protect.

Webroot’s Internet Security Complete plan incorporates its antivirus security with cloud storage and data protection. The main benefit of the Complete plan is its extra 25 gigabytes (GB) of encrypted storage. Webroot Complete may be a good fit for users who need to securely store and protect their digital files from malware.

How We Tested Webroot

We made it our goal to find out just how tough Webroot’s defenses are. By running each feature through a series of tests on multiple devices, we were able to judge Webroot’s security strength.

We looked to see how well each device and plan handled:

We do not recommend this type of malware testing on your devices. Testing antivirus software can result in malware corrupting your files and devices while stealing valuable information from you. Our tests are performed in a safe environment by professionals.

How Webroot Performed on Android Devices

The Android SecureAnywhere Mobile app blocked and removed all malware-infected files we tried to download from AMTSO’s testing page using our LG G6. The Android app, however, did not block our custom-created malware from being downloaded and installed, but it did block it from running after it was downloaded. Webroot’s SecureWeb mobile browser did a good job blocking AMTSO’s phishing sites, but it failed to block our custom phishing in Gmail.

We encountered more problems using the Chrome browser. The antivirus protection didn’t work all the time, and we managed to install the AMTSO malware test file. It took about 30 minutes for Webroot to detect the file. 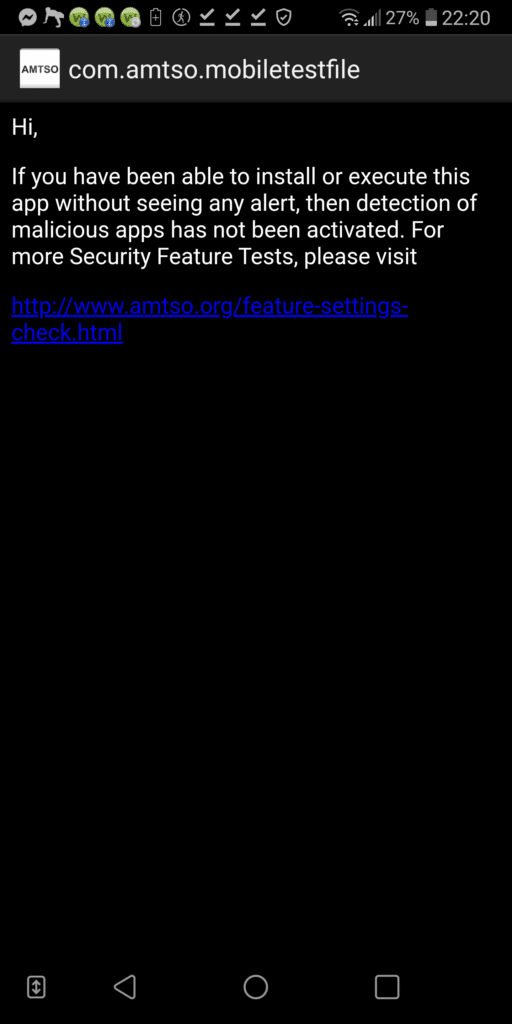 With Webroot’s Internet Security Plus plan, we were able to successfully download a malware test file from AMTSO, which means Webroot’s detection failed.

Additionally, the manual scan of our file system didn’t detect our custom malware files as being malicious in our “Downloads” folder, but it did detect AMTSO’s files. We found the web protection to be average. Sometimes suspicious sites, ads and popups were blocked, but not every time. The SecureWeb browser offered better protection than Chrome when visiting websites, but the online defense was still only average. Webroot blocked some suspicious websites from opening on Android.

Webroot’s paid plans also include an application monitor for data vulnerability, a network monitor to protect network connections and a battery monitor.

We found that Webroot provides decent protection for Android phones. It’s easy to use and doesn’t slow the system down. We do wish the web protection was more consistent.

How Webroot Performed on Windows

Webroot really shined when tested on our Lenovo Idea laptop with Windows running on it. The antivirus software detected all malicious files and blocked our manually-downloaded and drive-by downloads of malware. It also detected the compressed malware, and although we could still download the file, it was blocked and removed as soon as we tried to extract and run it. The manual scans also removed all malicious files from the computer, and Webroot had no trouble detecting our custom-made malware on Firefox. It did not, however, block the initial download. Webroot detected and defended against our custom-made malware tests on Firefox.

Unfortunately, the web protection was still average. It didn’t block all suspicious sites, ads or popups. The AMTSO phishing sites were blocked in Chrome, but our custom-made Gmail sites were not.

We also experienced some technical difficulties while testing Webroot Internet Security Plus testing on Windows desktop. AMTSO’s manual and drive-by downloads caused the Webroot software to crash, freeze and restart our computer while showing a blue screen. This happened multiple times. Anytime Webroot’s antivirus engine was activated, it restarted our system. Our compressed malware testing also showed unavailable pages, and another test computer crashed during our custom-made malware tests.

Webroot Internet Security Plus hindered our operating system and struggled to function on our Windows desktop.

This was surprising on a new, clean installation of Windows 10. It’s possible this was due to two antivirus programs running at once. It’s likely that either Webroot didn’t disable Defender in these situations or it’s incompatible with it. If you want to use Webroot on your Windows machine, make sure you manually disable Defender before you download Webroot.

How Webroot Performed on iOS Devices

For iOS devices, Webroot’s Mobile Security app is limited. That’s because iOS devices are typically better protected against viruses compared to other platforms. We tested security features, such as device update and password protection, as well as its missing device feature, which protects against theft and tracks your device location.

How Safe is Webroot?

Webroot is a trustworthy antivirus company with strong scores from independent lab testing. Overall, Webroot performed well in our tests. In some instances, however, like on Android and Windows, Webroot failed to block suspicious websites or downloads. Using the antivirus software is better than having no protection for your devices, but it doesn’t have the security scores we’d like to see.

Webroot’s plans include a wide variety of features, and its app functionality works well across multiple platforms.

Malicious URL blocking will detect a harmful website before your browser accesses it and will warn you about continuing to the webpage. Webroot plans include URL blocking.

Harmful phishing threats can be included as email attachments that infect your device with malware when you open them. Webroot can scan and detect phishing threats before you access them, which is included in all plans for all platforms.

A vulnerability scan will examine your device and let you know which files, system or apps may expose you to malware in the future. Webroot does not provide a vulnerability scan for Windows devices, and it’s also excluded from the free Android app.

The iOS app and the upgraded Android app include vulnerability scans.

Firewall protection means your device will be protected from incoming malware that travels over your internet connection. Webroot only offers firewall support for devices running Windows.

Antivirus software can help protect your identity credentials and recover them if they’re ever stolen. For instance, Webroot offers a lost device protection feature that allows you to remotely send commands to your device if you lose it. All Webroot plans and platforms come with some level of identity protection.

Parental controls allow the user to enforce content restrictions for children. Webroot’s plans do not include parental protection. If that is a feature you’re interested in, we recommend choosing other antivirus programs.

For its iOS app, Webroot includes:

How Much Does Webroot Cost?

Webroot includes three plans for a number of devices and various lengths of time.

Webroot Internet Security Plus with Antivirus (All Devices)

If you’re having trouble with Webroot, you can either use the support page to search for your issue or open a customer support ticket by sending a message to the service team.

Webroot doesn’t offer a live chat or phone number for customer support, but it does have a Best Buy partnership. You can call 1-800-BEST BUY to speak with a member of the Geek Squad if you’re a Best Buy customer, or you can chat with a support agent by phone.

Webroot has a strong reputation in the antivirus industry. It’s been reviewed by SE Labs and most recently scored a 91 for Protection Accuracy, a 100 for Legitimate Accuracy and a 97 for Total Accuracy.

With less than 50 reviews on Trustpilot, Webroot scores a 2.3 out of 5 stars. Amazon reviews, however, show a 4.4 out of 5 stars average score, which is based on more than 2,000 reviews.

Webroot Antivirus: Is It Worth Downloading?

Webroot presents a lot of features within each plan level, and they work well on multiple devices, apps and browsers. We like Webroot’s customer support options and how long the company has been in the industry. Its testing scores from SE Labs are great, and we saw no slowdown on any devices we tested, which can’t be said for other antivirus products.

The biggest drawback to Webroot is how it performed during our tests. While it typically performed well, there were a few occasions where a suspicious site or dangerous file slipped through the cracks. This may not be everyone’s experience with Webroot, but our testing didn’t show quite enough success in defending against malware to merit a hearty recommendation.

Antivirus programs work to identify and actively defend against malware that could infect or have already infected your device. Malware includes computer viruses, spyware, adware, ransomware and more.

Yes. If you’re regularly using the internet on your phone and downloading new apps or files, antivirus is a necessity, especially if you have an Android device. Antivirus phone apps can help protect your device from the other apps you’ve downloaded.

Yes. While iPhones and Mac computers aren’t as vulnerable to malware due to their closed-source operating systems, we still recommend antivirus software if you’re using iOS or macOS. Malware is evolving all the time and has become more dangerous to Macs and iPhones in recent years.

Webroot can work with the following:

View the system requirements for each device type.