States with the Most Home Security-Related Arrests

Find out which states have the most home security-related arrests and read our tips on how to protect your home.

Many homeowners are turning to home security systems and equipment to protect themselves from crimes committed on their property. With this in mind, the Gizmodo research team compiled reported arrest data from the FBI on four types of home-related crimes: vandalism, robbery, burglary, and arson.

While these crimes aren’t always committed on residential properties, our team wanted to raise awareness on the prevalence of these issues in your community. Read on to learn more about the number of criminal arrests in your area and how these numbers have changed throughout the years. 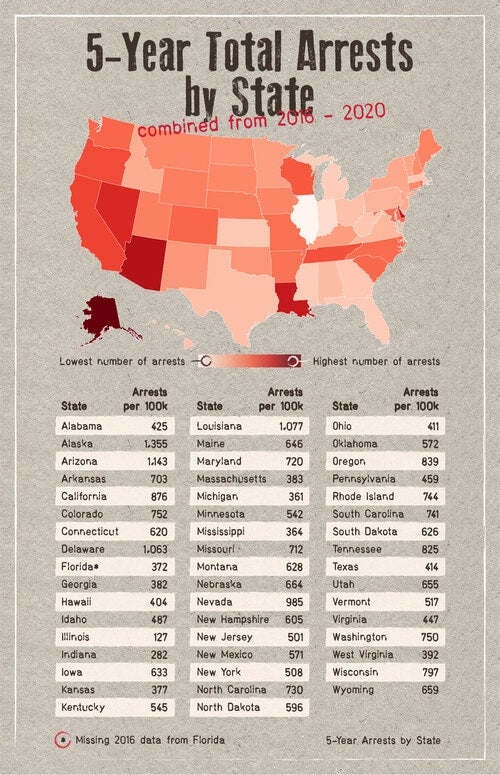 Despite being one of the least populous states in the country, Alaska topped our list with a reported 1,355 out of every 100,000 residents arrested for either burglary, arson, vandalism or robbery from 2016 to 2020. While America’s Great Frontier had the highest total of reported arrests across the four crimes we researched, Illinois had the lowest total of reported arrests for these four crimes. Chicago’s home state reported just 127 arrests per 100,000 residents for burglary, arson, vandalism or robbery from 2016 to 2020.

It’s important to note that only burglary, arson, vandalism and robbery arrest records from 2016 to 2020 were collected. Florida’s reported arrests from 2016 were unavailable, so a four-year arrest record was used for this state. To investigate criminal arrest trends across all states, we calculated the percentage change in home security-related arrests in each area from 2016 to 2020. Colorado had the largest increase in arrests across all four offenses, including a whopping 551% increase in arson arrests during the five-year period. The state known for its beautiful mountain ranges and breathtaking landscapes also saw an increase in vandalism, robbery and burglary arrests.

Pennsylvania had the largest decrease in home security-related arrests during the five-year period. This state saw nearly a 100% decrease in vandalism, robbery, burglary and arson arrests. Alabama also saw a steep decrease in home-related crimes, finding itself within the top three for highest percentage decreases in reported arrests across all categories. Tips on Keeping Your Home Safe

In addition to a home security system, there are a few other ways to deter criminals from your home. For example, illuminating points of entry and maintaining a well-lit yard wards off many potential criminals. Additionally, equipping exterior doors with deadbolts, locking all windows and keeping your garage door closed can all help secure your home.