ExpressVPN Review: A Great VPN for Personal Use

Protecting your online information and browsing data is becomes much simpler when you use a VPN.
A
Gizmodo Advisor Reviews Team 09/30/2021 12:00 pm

Browsing the internet through public Wi-Fi without a private virtual network (VPN) increases your risk for exposing your personal data to hackers. ExpressVPN consistently earns top marks for its encryption and user protection, but the VPN provider’s wide array of supported streaming devices impressed us during our tests. Our ExpressVPN testing and evaluation results will help you decide if the VPN provider is a good fit for your needs.

Read our Best VPN Services for 2021 to see where ExpressVPN ranks against other top VPN providers.

What is a VPN?

A VPN is a program that provides you with a personal “tunnel” you can use to encrypt your online activity. This means your personal information is secure when using public Wi-Fi. A VPN is also handy at home because it shields your browsing history from your internet service provider, which has the authority to sell data about you. Because your location is obscured with a VPN, you may be able to access region-specific television shows, sports events and more from around the world.

ExpressVPN works when you select a subscription plan, download the app to your computer, phone, tablet or a router. The VPN app is available for Windows, Mac, Linux, iOS, Android and more. It also works on a variety of other devices, including smart TV systems, as well as gaming and streaming systems like PlayStation, Xbox and Nintendo Switch.

You can install ExpressVPN on as many devices as you like, but you can only connect and run five at the same time. If you install the ExpressVPN on a router, you will be able to protect your data on more devices at once, and there’s no need to install separate apps on each one. You may, however, need to purchase a new, compatible router.

Once you’ve installed the VPN software, you may select which VPN protocol you want, as well as your server location.

ExpressVPN is based in the British Virgin Islands, a privacy-friendly territory with no data retention laws, so it never logs user browsing or network activity data. It uses the Advanced Encryption Standard (AES)-265 and several VPN protocols, including its proprietary Lightway protocol. Lightway is designed to increase speed, reliability and security.

In our tests, however, ExpressVPN lagged behind other top VPNs in speed. Windows and Mac users can test ExpressVPN’s download speeds and latency, which is the time it takes for a data “packet” from your device to reach the VPN server.

If your ExpressVPN connection fails for any reason, a kill switch prevents network data from leaking outside of the secure VPN tunnel. Network Lock blocks all internet traffic until the connection is restored and the VPN server is up and running again. A Domain Name System (DNS) leak test and Web Real-Time Communication (WebRTC) leak test will allow you to easily determine whether your information may be — or has been — leaked.

One important thing to note is that ExpressVPN lacks the popular WireGuard protocol offered by competitors. We also noticed that there are more security options for Windows users than those using Apple’s current operating system, macOS 11.4 (Big Sur). If you’re a Mac user, you may want to consider using another VPN provider. We’ll talk more about ExpressVPN protocols in the next section.

Recently, ExpressVPN has been under scrutiny. Gizmodo reported that ExpressVPN Chief Information Officer Daniel Gericke previously worked as a hacker-for-hire. Gericke was part of Project Raven, a secret operation to help the United Arab Emirates monarchy survey and track certain activists, journalists and other critics. ExpressVPN admittedly knew Gericke’s history, which has led to criticism from both users and employees. Read the company’s full response.

ExpressVPN was acquired by Kape Technologies in September 2021. Formerly known as Crossrider, the company has a history of online traffic manipulation, which may also leave ExpressVPN users uneasy. As Kape Technologies, the company says it has rebranded and refocused on privacy. It previously acquired VPN services Private Internet Access (PIA), Zenmate and CyberGhost. We’ll continue to monitor the company’s response to this controversy, but with essential services, features and security audits in place, our Advisor Reviews Team ratings are unchanged for now.

The ExpressVPN features are extensive, and even the basic features list — 160 server locations, 24-hour live chat support, IP address masking — is quite long. Two key functions to focus on are available VPN protocols and the number of servers and their locations.

A VPN protocol, defined as instructions that determine how two devices communicate with each other, sets the security of your connection to the internet. Each protocol uses a different set of authentication and encryption options. Depending on the protocol’s combination, you may see stronger or weaker security and a difference in internet connection speed.

ExpressVPN automatically selects the protocol that is best for you based on your internet speed. You’ll see in your VPN app that your protocol is defaulted to “Automatic.”

You can, however, manually select a VPN protocol if you wish. 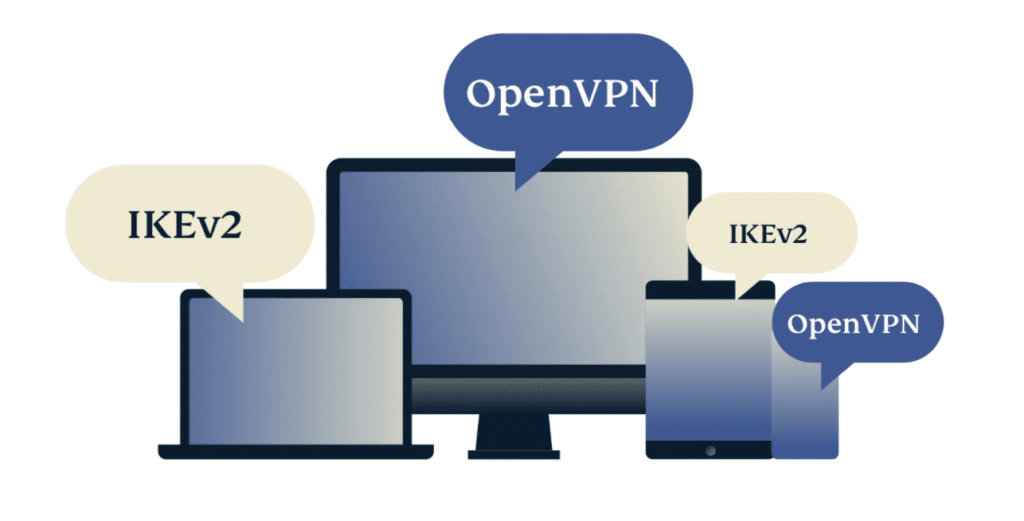 The protocols that ExpressVPN offers include:

Here’s a closer look at each:

Lightway UDP and Lightway TCP are available on apps for Android, iOS, Windows, Mac, Linux and routers. Lightway, as we mentioned earlier, is designed for faster speeds while using less battery power. It’s also easier to audit and maintain than other protocols.

OpenVPN also supports both UDP and TCP ports. OpenVPN typically runs faster on a UDP port. The ExpressVPN app will most likely choose UDP as the default when using OpenVPN. TCP, however, is a better choice if you are on an unreliable network. The downside is TCP can be slightly slower than UDP.

IKEv2 offers lighter, steadier flexibility than OpenVPN while also providing customizable options. L2TP does not provide the best encryption on its own. IPsec is a flexible protocol that authenticates and encrypts each IP packet in any communication. L2TP and IPsec are traditionally used in conjunction to offer a secure and fast VPN network. L2TP/IPsec is better suited for anonymization instead of security.

Torrenting, or peer-to-peer file sharing, is supported on ExpressVPN. A VPN is especially important when using a P2P client like uTorrent. Otherwise, anyone on the P2P network could potentially access your IP address, track your activity and collect information about you.

One more extra we like about ExpressVPN is the included password generator that provides randomly generated passwords for you to use. All passwords are securely generated on your device and are never sent across the internet. You can select character types and password length and ExpressVPN will generate the password for you.

When you use a VPN, you are connecting to the internet through a tunnel, which is provided by a server. The more servers locations in multiple countries, the better the diversity of those offerings will be for you.

With 160 server locations in 94 countries, ExpressVPN servers outnumber many other VPN providers including Cyberghost.

When it comes time to select your VPN server location, a few factors may drive your decision. If you’re simply looking for the fastest VPN connection, you can select a server location on the “Recommended” list that is closest to your physical location. If you are in a country with strong censorship practices, you can use the “Smart Location” feature to find the best server location to access the internet. And if you are interested in watching content that is only available to a specific country, you’ll want to choose a VPN server location within that country. This essentially lets you spoof your IP address location, which is what allows you to gain access to your specific video content. 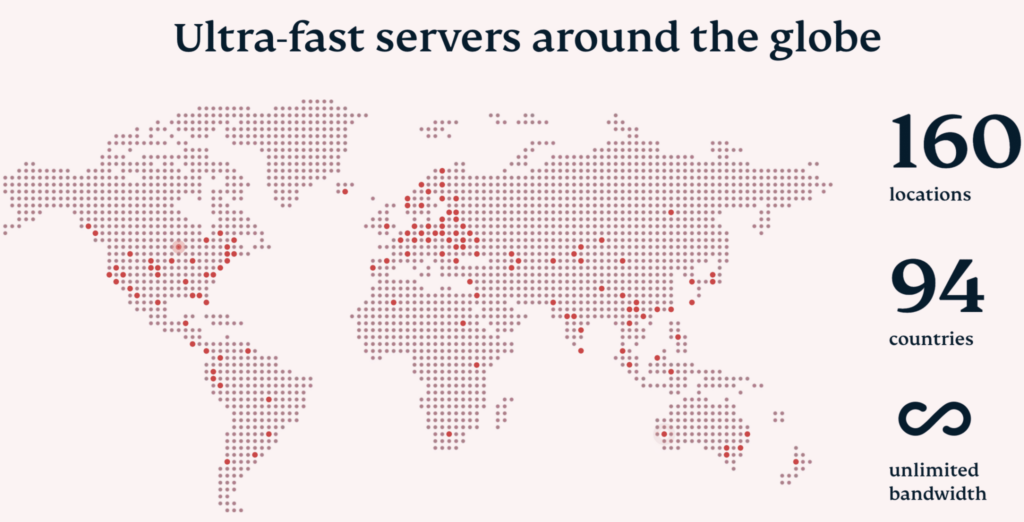 ExpressVPN offers three subscription levels: one month, six months and 12 months. It’s important for us to note that the longer-term subscriptions require you to pay in full at the beginning of your service contract. The ExpressVPN website shows a reduced monthly rate for long-term contracts, but you won’t pay for the VPN service month-to-month.

A free trial period is only available for certain devices and LastPass Premium or Families subscribers. ExpressVPN offers a 30-day money-back guarantee. You can purchase ExpressVPN using a credit card, PayPal, Bitcoin or other forms of payment such as Mint.

ExpressVPN offers customer support via live chat or email. Customer service is not provided via phone. ExpressVPN has a library of VPN setup tutorials for all devices and platforms, which we found helpful. ExpressVPN has an overall Trustpilot score of 4.6 out of 5 stars, with 86% of the 7,000+ reviewers rating it as excellent.

Is ExpressVPN the Best Option for Your Needs?

Overall, ExpressVPN is a good choice for most users. We like its no-logging policy, as well as the solid speeds and protocols that are designed to keep your information secure. But ExpressVPN is a best fit for users looking to anonymously stream, file share or access content that isn’t available in their home country. You can use just about any streaming device with ExpressVPN to watch movies on another country’s Netflix platform or catch an overseas sports match.

After spending 100 hours researching and testing virtual private networks (VPNs), the Gizmodo Advisor editorial team compiled its VPN reviews so readers can easily find the VPN service best suited for their needs. The editorial team’s testing and review system is an unbiased, third-party review that is independent of any commission Gizmodo Advisor may receive from the sale of a product. Our chart below outlines the factors taken into consideration during the VPN testing and review process, as well as the overall scoring weight given to each category.

ExpressVPN is not free. The VPN service, however, does offer a 30-day money-back guarantee. So, if you cancel within your first 30 days, you will receive a full refund.

Related Articles
Best VPN Service of 2022: 12 VPNs Compared
How to Get a VPN
What is the Cheapest VPN?